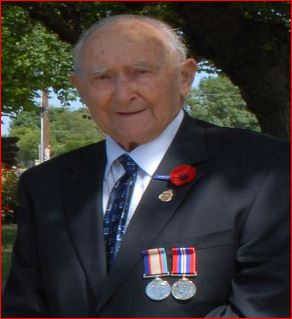 
Roy was the only child of Tom and Dolly Drake. Tom was a WW1 Soldier settler, and their farm was only a few kilometres from here (Derrinallum) today.
Mum took Roy to school in the horse and buggy he recalled.
He left school at the age of 14 and went home to work on the farm.

He was called up in the army in 1941.
Roy was stationed at Seymour. He was sent to Darwin along with Col Urquhart from Urquhart Motors.
His unit looked after the Fenton Airstrip and also did reconnaissance out on the Darley River looking for downed aircraft.

At one stage during the war his Dad wrote to Roy as their neighbours the Primrose's were selling out and asked did he want a farm. But he said - No. Roy didn't like the cows and they didn't like him.

At the time of the 1944 fires Roy received a telegram from his Mum- saying ‘Lost everything but we are ok'. So he came home to help out.

After the war Roy worked on the farm and then at the Butter Factory for 2 years.
He worked for Don Rogerson driving trucks for 2 years.
Then he worked for Lindsay Eldridge as head mechanic for 17 years.
He enjoyed working with Lindsay, who was very, very good to Roy.
In 1971 he started working for the CRB including 7 years as the boss.
He worked with Neil McKenzie, Keith Britton and Johnny Pop McLachlan, all from Derrinallum.

We can thank Roy and Bill Williams for the early work on the lawn cemetery.
They went to Scarsdale cemetery initially to view the layout there.
The Fire Brigade was one of Roy's pets.
Roy was a Foundation and Life member of the Fire Brigade. Joining in 1945. Gordon Heard and Roy built one of the first Fargo fire trucks, Roy went on to build 3 more trucks.
He served for 70 years. He was very proud of the Fire Brigade.


In recent years, he was active member of the Men's Shed at Lismore.
When he wasn't doing all these things he still found time to play Indoor Bowls.
Well done Roy, Derrinallum thanks you for all you have done over the years.